EQuIS EnviroInsite (EQuIS EI), is a toolkit for the analysis and visualization of environmental data, and formerly developed by EI LLC as EnviroInsite K'Nect. It is licensed by Earthsoft, Inc. and has multiple capabilities, including creating site maps, analyzing stratigraphy, visualizing environmental data, and preparing report graphics. EQuIS EI connects to an EQuIS Database and directly accesses EQuIS data. More information about EQuIS EnviroInsite is available here.

EQuIS EI provides a direct connection with the EQuIS Database, rather than requiring an export from EQuIS Professional via an intermediate Access Database and then opening the Access Database in EnviroInsite. Much of the functionality remains the same as for previous versions of EI.

EQuIS EI can be used with EQuIS Professional and Enterprise. Where it is used with Enterprise, it is not a requirement for EQuIS Professional to be installed locally. For an Enterprise user to connect to the EQuIS Database via EQuIS EI, they must be assigned to an Application Level Security (ALS) role. It is possible for an Enterprise user to have other roles (non-ALS roles), in which case the user could use Enterprise but not Professional/EI. The client could create an "EQuIS EI" role that is specific to users who will be using the program. At the very minimum, the ALS role will need INSERT/UPDATE permissions to the ST_LICENSE_USE table and DB_DATAREADER for the EQuIS Database. See below for the complete list of EQuIS tables used by EI.

EQuIS EI is a 'standalone' installation of EnviroInsite. The program can also be opened directly, using the following application:

The EnviroInsite shortcut button in EQuIS Professional is located on the Decision Support tab of the ribbon:

This button may be deactivated upon first connecting to EQuIS. To enable it, click on the license level at the bottom-right of the EQuIS Professional screen (typically Standard upon first logging in), click on the Decision Support tab, and check EnviroInsite. A yellow square will appear in the bottom bar. 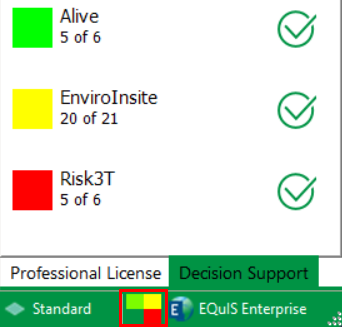 The connection to the desired EQuIS Database can also be made after opening EQuIS EI. Select File > Open Database > EQuIS Database (shown below) or press the EQuIS button on the taskbar.

The following is a list of the EQuIS tables used by EQuIS EI, for which the correct permissions will need to be granted for Enterprise users: