The Data Correction feature on the Data Forms page allows administrators to resubmit data using another Collect template. Ideally, the feature is designed to correct data mappings for forms that have already been pushed from Collect Mobile and resubmit the data. The Data Correction feature can be applied to adjust data whether it failed or passed the EDP checks. Incorrect data mappings might not produce EDP check errors, but may result in data being loaded to the wrong fields in the database.

Template A has a data mapping with an invalid formula in the mapping, causing it not to create a parameter record when data is entered in the field.

Data was pushed through Template A all week, and the issue was only discovered at the end of the week. The template was then updated with the fix (Template A, v2) and the field crew continued their work.

Data collected prior to the fix needs to be resubmitted through the new template so it will produce the new parameter record. The Data Correction tool can be used to resubmit the original data via the new template. Note that both the original EDD and the new EDD will be present on the Data Forms page.

Template A has a comment field that is mapped to ‘Custom Field 1’ in the DT_LOCATION table. This mapping was incorrectly setup and mapped to ‘remark’ instead.

Data was pushed through Template A all week, and the issue was only discovered at the end of the week. The template was then updated with the fix (Template A, v2) and the field crew continued their work.

Data collected and submitted prior to the fix uploaded data to the wrong field. The wrong data must be removed and the correct data inserted. The next steps depend on the commit type set for the format in Enterprise EDP.

If the commit type is "Insert and Replace", the Data Correction tool can be used to resubmit the original data via the new template without any additional steps.

If the commit type will not replace the wrong data values, then the original EDDs should be rolled back from the database to remove the data from the wrong field prior to using the Data Correction tool to resubmit the EDDs via the new template.

Prior to applying a data correction to a pushed data form, any mapping errors in the form's template need to be corrected. The following steps provide a process overview:

1.On the Template Designer page, copy the original template that contains the data mapping error(s).

3.In the template copy, make any necessary changes to correct the data mappings.

4.Once the template is ready, publish the corrected template. 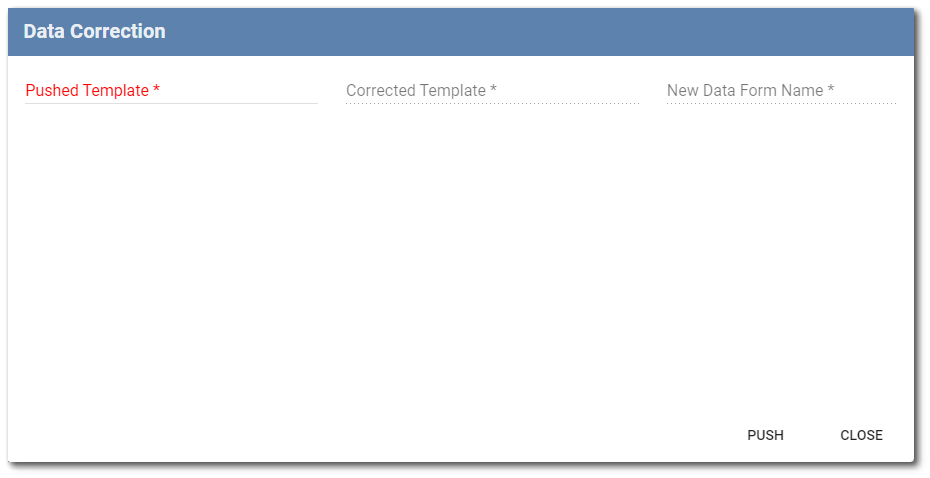 In the Pushed Template drop-down, select the original template that was used when the data form was pushed from Collect Mobile. This should be the template that had the wrong data mappings. A list of submitted data forms will appear based on the selected template. Select the data forms to be corrected. 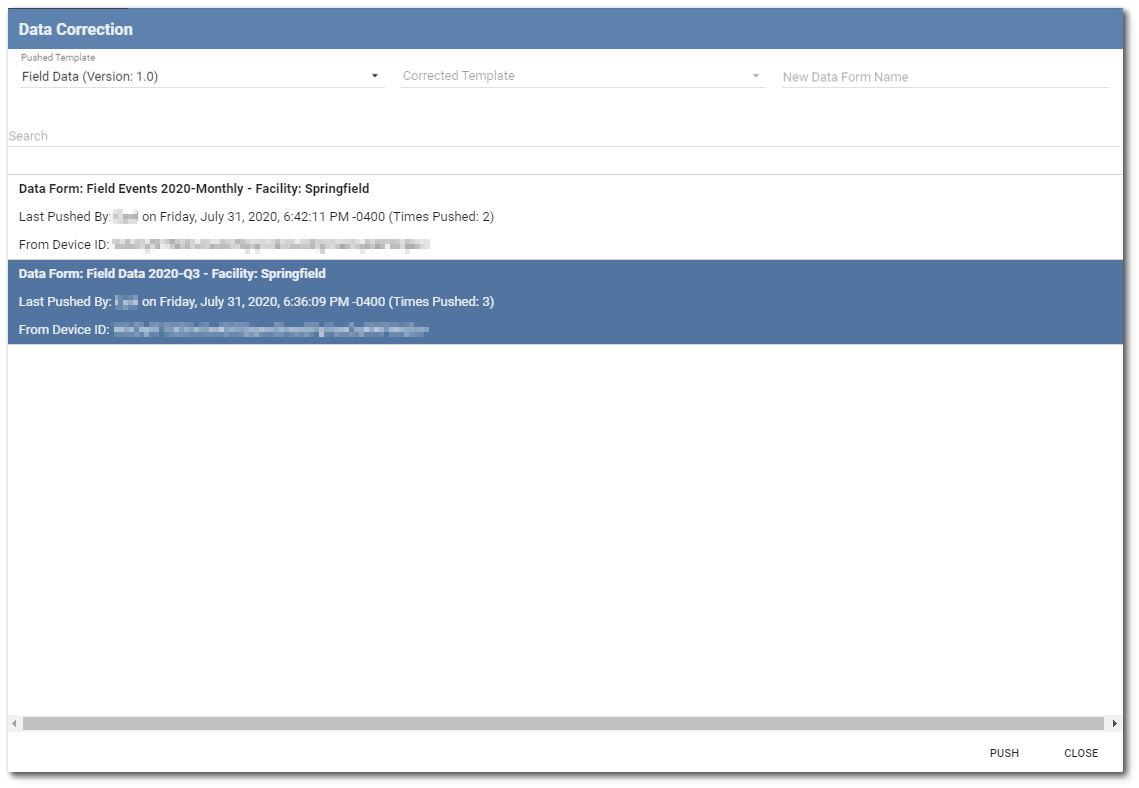 In the Corrected Template drop-down, select the newly corrected and published template. In the New Data Form Name text box, enter a new form name for the resubmitted data form. Once all the information is selected and entered, click the Push button. 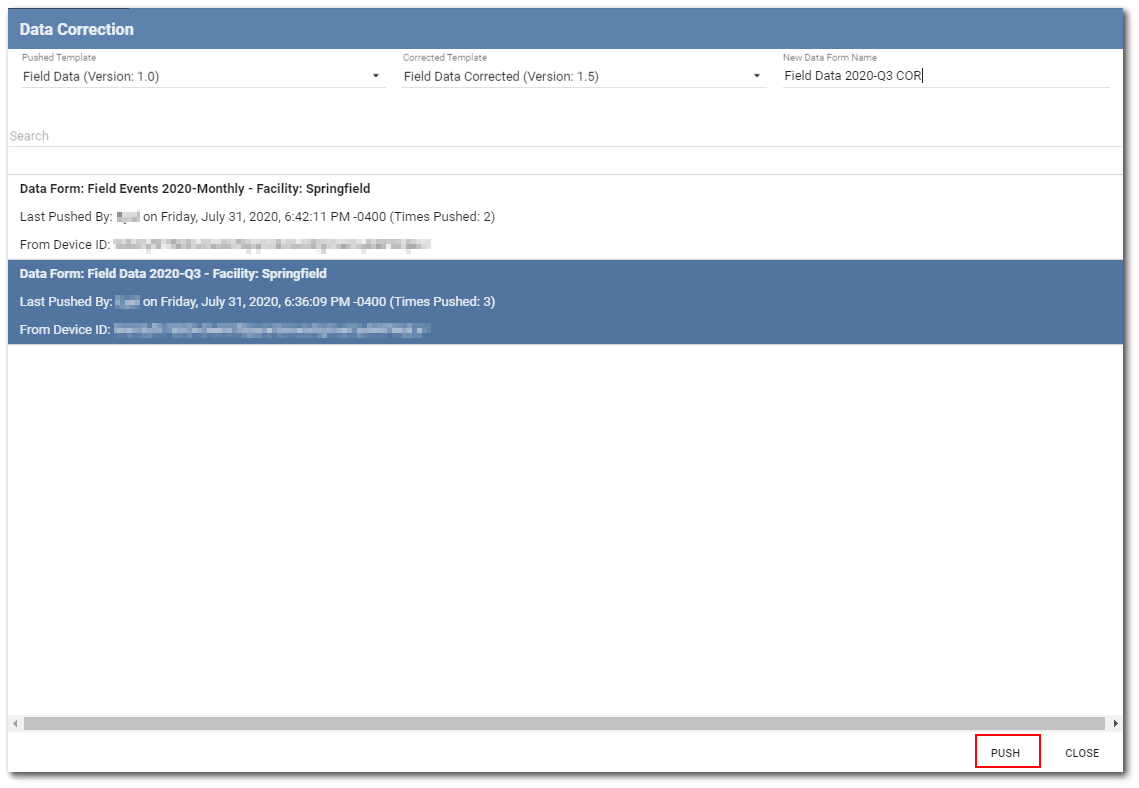 Each data form selected will display a status dialog indicating it is being processed and once finished will display “Corrected.” Once all the forms have finished, click Close to exit the dialog. 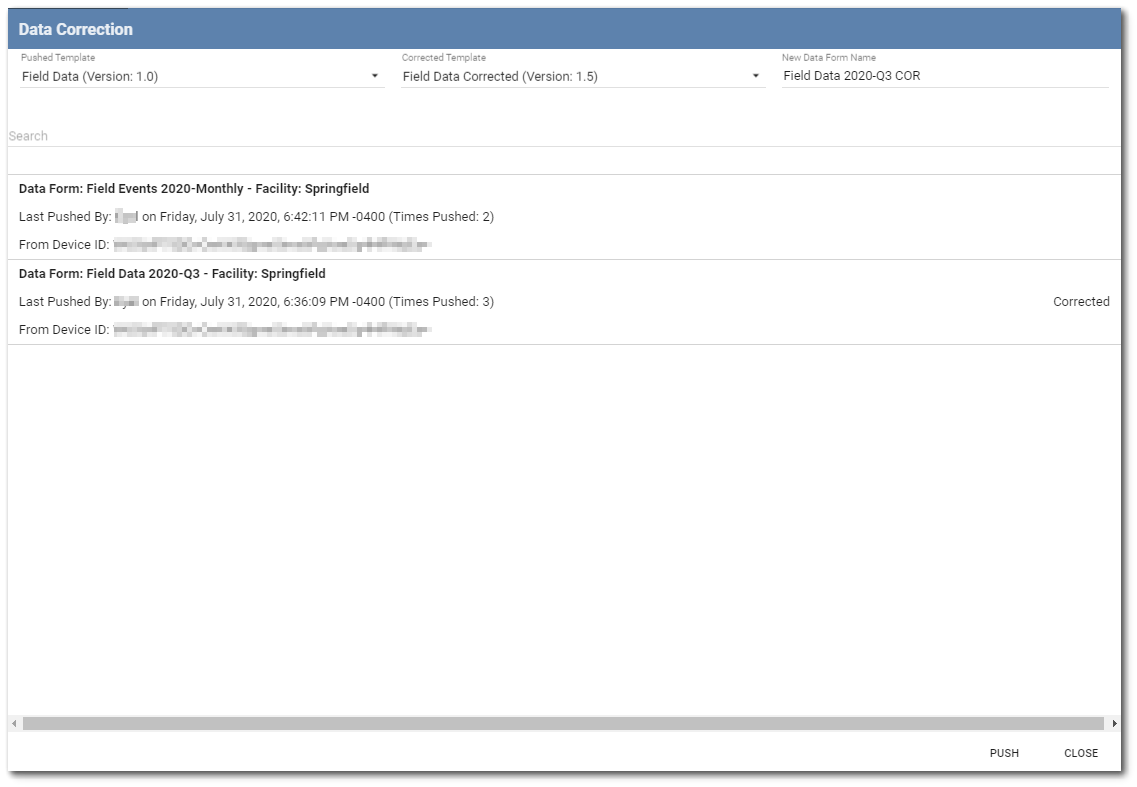 The resubmitted data form will be available on the Data Forms page.