The EQuIS Database Schema is capable of representing both multi-screen and nested wells. The multi-screen configuration represents a single casing equipped with multiple screens or multiple sample devices used to determine local conditions at various intervals. It also includes the installation of multiple transducers for measurement of potentiometric head at discrete intervals, where there is no capability of obtaining water samples. The nested well configuration also allows for the collection of water samples or measuring of potentiometric head at discrete intervals from a single borehole, however, multiple casings or lines are installed within the borehole. The multiple casings and screens or sampling devices are referred to as a set of nested wells or devices.

The figure at right shows two boreholes. The borehole on the left shows two nested wells installed within a single borehole. The screened intervals are separated by bentonite seals to ensure that the intervals are hydraulically isolated. In the right-side of the figure, the borehole is equipped with both a single monitoring well of moderate depth and multiple transducers (represented by the hollow rectangular shapes) at multiple depths. This is essentially a hybrid of the nested well and multi-screen wells within a single borehole. 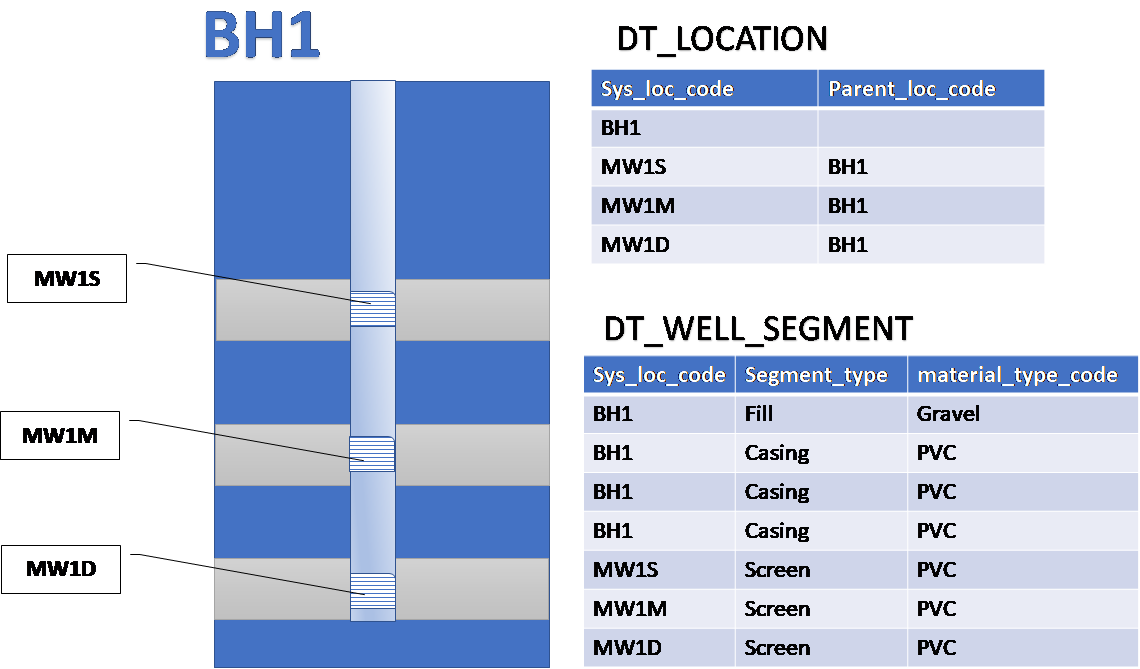 As in the previously described case of the single multi-screen well, DT_WELL_SEGMENT records describing backfill will use SYS_LOC_CODE values that refer to the parent borehole. Likewise, each of the individual screens or sampling points are described in records with unique SYS_LOC_CODES within DT_WELL_SEGMENT. In addition, within DT_LOCATION, the PARENT_LOC_CODE field of each of the daughter wells is populated with the SYS_LOC_CODE value of the parent borehole. The main difference between the multiple nested wells case and the single multi-screen well case is that the records in DT_WELL_SEGMENT that refer to the casing and other well infrastructure of the individual wells will be populated with the well’s second-generation SYS_LOC_CODE values.

In the example below, BH1 is the parent location. As in the case of the single multi-screen well, all records referring to backfill material in DT_WELL_SEGMENT should reference the BH1 SYS_LOC_CODE value. The progeny are the single-screen wells MW1S, MW1M, and MW1D. Records for these wells in DT_LOCATION will carry PARENT_LOC_CODE values of BH1. All casing and screen records in DT_WELL_SEGMENT will carry the SYS_CODE_VALUES of the progeny wells (MW1S, MW1M, or MW1D).

This is a more complicated and less common configuration. An example is one or more monitoring wells installed in a single borehole (each with its own casing) and a set of transducers installed within a common line for measurement of potentiometric head at discrete depths. The use of the PARENT_LOC_CODE in this case is similar to multi-screen and nested wells, however, three generations are designated for complete representation of all infrastructure so as to assure a unique SYS_LOC_CODE associated with each sampling interval. Each of the monitoring wells and each multi-screen device will have a unique associated SYS_LOC_CODE. For each of these second-generation elements, the PARENT_LOC_CODE value in DT_LOCATION will be the SYS_LOC_CODE of the common borehole. The individual sampling devices or screens of the multi-screen well or device will be represented with unique records in DT_LOCATION and DT_WELL_SEGMENT. The PARENT_LOC_CODE values in each of their DT_LOCATION records will be populated by the SYS_LOC_CODE of the multi-screen well. These sampling intervals or well screens are in essence the third generation offspring relative to their common borehole.

The Multi wells EQEDD.xls file is an example EDD and includes location, well and well segment data. This example file can assist the user to create the multi-well segments described in this article. The file is located in the EarthSoft Community Center Downloads Dashboard in the All Items> Examples > EDDs folder.