EarthSoft has a strong commitment to information security. From the early days of EDP, the ability to create custom EDD formats has been an important part of the EDP ecosystem. The balance between information security and customizability requires ongoing attention and evolution.

Starting with the EQuIS 7.22.1 Build, formats must be strongly named. In addition, the plain-text EDD format files (i.e., *.xsd) must either be encrypted by EarthSoft (i.e., *.xse) or embedded as a resource in the strong-named .NET assembly (i.e., *.dll) except if the format is being used in:

Professional EDP (when using application-level security) and Enterprise EDP require that the format be strongly named AND the plain-text EDD format files (i.e., *.xsd) must either be encrypted by EarthSoft (i.e., *.xse) or embedded as a resource in the strong-named .NET assembly (i.e., *.dll). All formats distributed by EarthSoft are strongly named and either encrypted and/or embedded in a strong-named .NET assembly.

Many custom and standard formats are already maintained using a Class Library project in Microsoft Visual Studio (see Debugging EQuIS Formats in Visual Studio). To embed the format files in the assembly, do the following:

2.Ensure that the format file (*.xsd) and, if applicable, the export file (*-export.xml) are included as files in the project.

3.In Solution Explorer, right-click on the format file (*.xsd) and choose Properties.

5.If the format includes an export file (*-export.xml), repeat the previous two steps to embed the *-export.xml file as a resource.

6.Ensure that the assembly is strong-named and that the strong-name public key token is correctly entered in the ST_CONFIG table (see Approve Strongly Named Custom Assemblies). 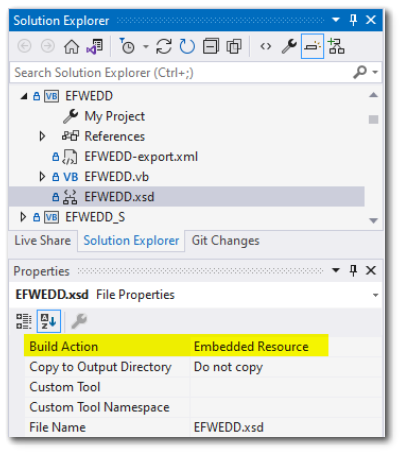