Use the Aggregate feature in a Crosstab Report with any of the standard EQuIS reports to include a statistical computation of average, maximum, minimum, etc. in the report output:

•Tabbed Data Aggregates populate the aggregate values in the main cells of the report output grid.

•Row Header Aggregates add row header columns populate with the aggregate values for each row, for easy reference alongside the raw data of the main output grid.

The following aggregate options are available for both Tabbed Data and Row Header aggregates.

XY and XYZ charts can also be created from these aggregated results.

For datasets that contain a mix of numeric and non-numeric values, arithmetic aggregations (all aggregates except First, Last, and the Count aggregates) will proceed with the appropriate calculation while ignoring the non-numeric values. These results will be flagged with an asterisk (*) in the final Crosstab report.

The average Aggregate feature determines the appropriate number of significant figures using the fn_significant_figures_function in the EQuIS Database.

There are four count options for Crosstab Tabbed Data Aggregate.

to run the report.

5.In the Crosstab window, make the following selections. This will populate the tabbed data cells with the maximum result in the method analyte group for each sample, date, and locations (column headers) combination.

to display the report.

2.Set up the pictured Row Header(s) and Tabbed Data fields, then any other preferred options (such as SYS_LOC_CODE and REPORT_RESULT_UNIT for Column Headers).

3.In the Tabbed Data section, click Sum in the Aggregate column for REPORT_RESULT_VALUE. Side Note: To remove the Aggregate: Sum selection, select None.

In the resulting report, note how the sum of these individual chemical results are returned.

Following from the example in the previous section, a referenced aggregate may be added as follows:

to return to the crosstab configuration.

and find the first column with a 'B-38' SAMPLE_ID.

The maximum value for this sample on this date is 19.01, and the chemical from the _PERC Daughters method analyte group that has this maximum value is Trichloroethyene. If more than one chemical has the same maximum REPORT_RESULT_VALUE for a particular location, sample, and date, all chemicals with this value will be shown as is seen with the B-30 SAMPLE_ID.

1.Add REPORT_RESULT_VALUE into the Tabbed Data pane from the Available Columns list, as many times as number of columns desired, in the crosstab configuration screen.

2.Set the desired Aggregate for each REPORT_RESULT_VALUE in the design, for example, Minimum for one, and Maximum for another.

3.Change the Caption of each REPORT_RESULT_VALUE field to reflect the aggregate displayed in that field.

to verify the aggregate settings in the Crosstab Report.

to return to the crosstab configuration.

6.Add the desired referenced aggregate fields from the Available Columns list (such as CHEMICAL_NAME or SAMPLE_DATE) multiple times, one for each aggregate to be referenced.

7.In the Reference Aggregate field, enter REPORT_RESULT_VALUE: "Aggregate" where "Aggregate" is the aggregate selected in number two above. Two examples follow.

8. Change the Caption of each Referenced Aggregate field to reflect the aggregate displayed in that field.

to verify the aggregate settings in the crosstab report.

When an Aggregate of a Row Header is configured, the aggregated-Row-Header-related Tabbed Data cannot include duplicates.

Please update the configuration of the Row Header and/or Column Header to avoid multiple values in a single cell of Tabbed Data output and try again. To identify the duplicates in the Tabbed, run the crosstab by removing the Aggregate(s) from Row Header(s).

Tip:  If the above error occurs, run the crosstab using the Average Aggregate option for the Tabbed Data to process the duplicates.

2.The aggregate column must be selected only once in the Tabbed Data section, and the column must also be present in the Row Header(s) section. Otherwise, one of the two errors below may occur. 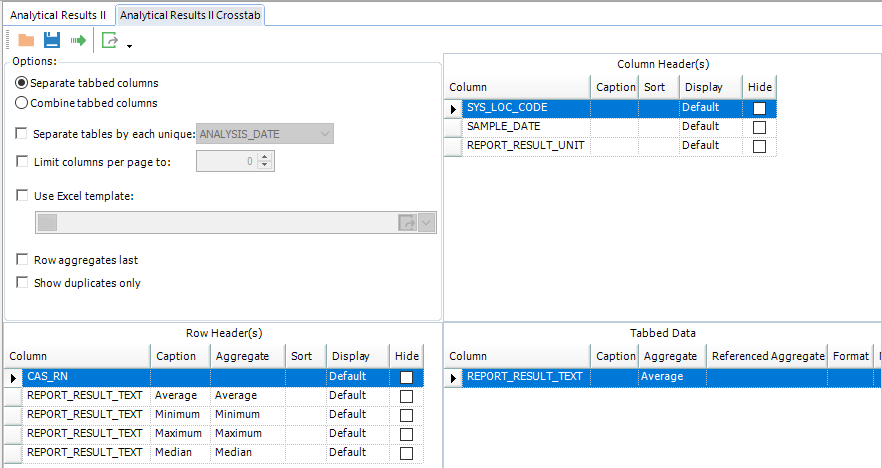 Processing non-detects: non-detect and detect value are not differed in calculating avg, max or min.