This article is an overview of the main components of EQuIS ALive. 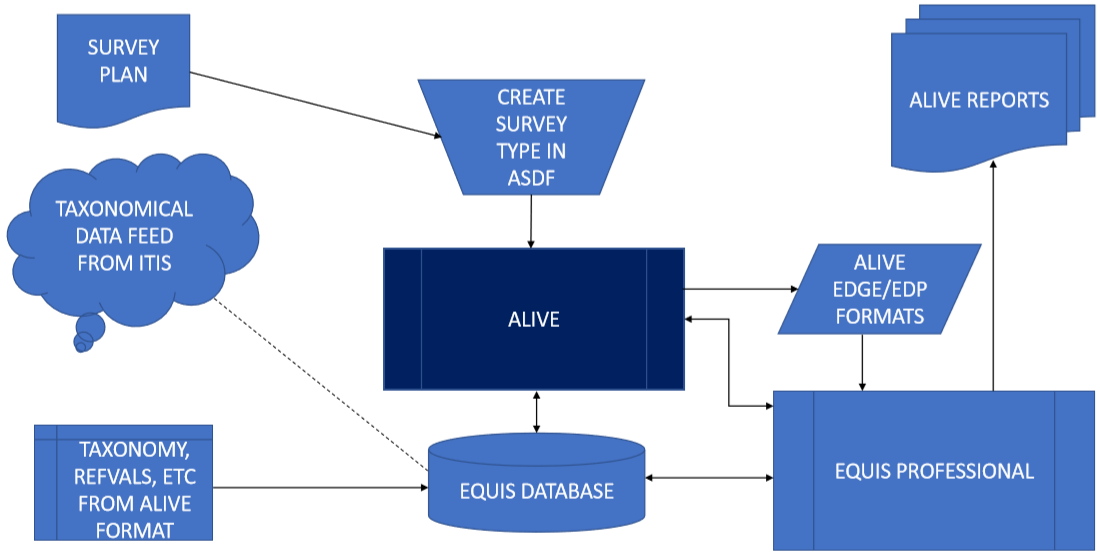 EQuIS Alive is built around the concept of performing surveys, and each survey consists of a set of observations made during that survey. See Create an Alive Survey for further detail.

Why subfacilities and not locations? A location traditionally represents a single point in EQuIS, such as a monitoring well or weather station. Subfacilities typically address areas rather than points, though they can still represent a point. Subfacilities can be used for sections of a facility, lakes, parts of a lake, fields, streams, a forest, etc.

Additionally, given the different nature of EQuIS Alive surveys, the DT_COORDINATE table (as a child of DT_LOCATION) may not be a good fit for the spatial data associated with surveys and observations. Therefore, the DT_SPATIAL_EXTENT table was introduced to support the different spatial data needs of surveys and observations. For further details on the DT_SPATIAL_EXTENT table, please refer to the help article Spatial Data Tables.

Observations made during a survey typically revolve around some species of flora or fauna. This list of species is contained in a hierarchical table, RT_TAXONOMY. RT_TAXONOMY is configured so that the species can be grouped together in a logical fashion.

This hierarchy of grouping can be as complex as the full taxonomical rankings:

It is recommended, and the most usable, to create a table structure that falls somewhere in between these two extremes. An example structure might be:

An important note is that, by setting up groups of species in the RT_TAXONOMY table, there is no need to set them up in the RT_GROUP table. Any level of the taxonomy structure can be associated with a particular survey, and that survey will include any child records with that RT_TAXONOMY.TAXONOMY_CODE. See the help article Create an Alive Survey for further detail.